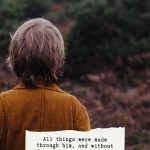 The sky was full of fluffy white clouds that floated dreamily overhead.  The sun was bathing the land in a warm, soothing light. The trees proudly displayed their leaves of dazzling green, stretching to meet the sky.  It was springtime, and all of nature was celebrating. My kindergarten students, however, were less than cheerful, pressing their noses almost up to the windowpane in our classroom, gazing longingly outside.  As I watched their desire to be outside grow with each finger pointing to the various aspects of the fair weather day that were on display, I was struck with an idea of divine measure.

"Who wants to go on an adventure?"  I asked, closing my teachers' manual and reaching for my sunglasses.

"To where?" the curious faces of my students contorted as they tore their fixed looks away from the glass and regarded me with hesitance.

With a bible in my hand, I led my students outside where we sat down in a circle near the fence on the far edge of the playground.  There, I instructed the children to calm their bodies, and led them in a few rounds of deep breathing to make sure all the wiggles worked their way out of their small forms before we settled in.  Then, I engaged my students in a discussion of God's great love for the physical world He has created.

We started with an examination of scripture, and the beauty of God's creation as presented to us through the Word.  In particular, we discussed the following three verses:

After discussing the Word of scripture as it relates to the natural world, I encouraged my students to close their eyes, and listen to the symphony that God was playing, just for us, using the instruments of nature.  We talked about the sounds they heard, and what role they thought those sounds played in God's concert. The ideas that my students came up with and shared with one another were astounding; it was evident that God's love was not lost on them:

I am sure we could have identified many more instruments playing in God's symphony that afternoon, but the school day was coming to a close, and backpacks needed to be packed before heading home.  Reluctantly, my students and I gave a prayer of praise and thanksgiving to God for His endless presence and the gift of the natural world, before our adventure came to an end and we headed back inside.

In this coming season of warm weather, I encourage you to engage your own children in a trip to God's symphony.  The adventure is well worth the free price of admission, and the experience will leave both you and your children filled with a sense of awestruck wonder about the greatness of our God.

A Little More About Rebecca

Rebecca Flasz is a passionate lifestyle writer, world traveler, and dream seeker. For her, life is an adventure, and there is always a new experience to be had and written about.  Rebecca believes that she is contributing to furthering the mission of God by bringing her stories of spiritual inspiration to others.

Hi, I'm Rachael! I'm here to encourage you to bring more healing into your everyday home. You'll find that I love Jesus, the Trim Healthy Mama lifestyle, my children, my exceptionally country-boy husband, and all things DIY. Welcome to Healing Home!